The date has been set for the next installment in the bourbon tasting series at the Main Street Wine Bar!  On Saturday, June 30 at 6:00pm sharp, we’ll embark on a journey through 6 examples of Trey Zoeller’s homage to Thomas Jefferson’s innovative and experimental nature under the Jefferson’s Bourbon moniker. 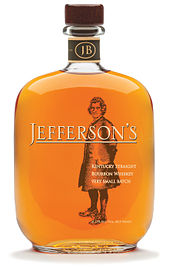 Founded in 1997 by Trey and his father Chet, the brand is now owned by Castle Brands and produced in the Kentucky Artisan Distillery near Louisville.  The emphasis and focus remains on innovation through “selection, agitation and environmental processes,” hence Jefferson’s motto: “Alchemy is Everthing.”  This dedication to creativity is perfectly captured in the group of bourbons we’ll be sampling:  with examples of the foundational Jefferson’s blending prowess (including a 16 year old Presidential Select), innovation (Ocean Aged), and cask finishing (Old Rum Cask Finished).

So call us and reserve your spot for what should be an unforgettable evening at the mainstreetwinebar.com!

The Bourbon Blog for the Main Street Wine Bar

Visit www.mainstreetwinebar.com for upcoming bourbon tastings and other events